Please note the booking fee for this event includes a Venue Fee of £1.35 which is charged by the venue 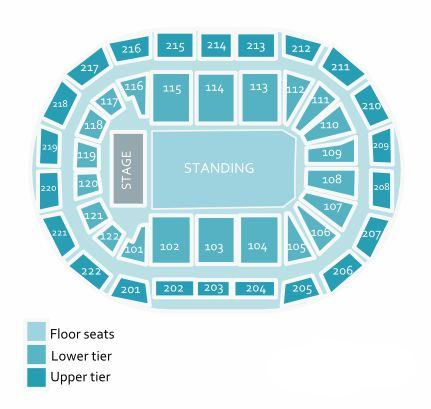 14+ only in the standing area, 12s - 14s must be accompanied by an adult in the seating area. No refunds will be given for incorrectly booked tickets.

Where we provide a seating plan for events, every effort is made to show you correct information. Ho...

Under 14 must be accompanied and no under 14s go on the floor for standing floor shows.

Children shows allow babes in arms up to 23 months however some shows specifically targeted at younger audiences require a ticket for anyone attending the performance. Please check the relevant show's event page for further details.

Further enhanced security checks have been put in place at Manchester Arena to provide reassurance and confidence and we advise you to arrive in plenty of time to pass through these additional security checks.

We also ask that you keep personal belongings to a minimum and only bring your essentials with you. Please do not bring any backpacks or large bags as these will not be permitted into the arena. You are permitted to bring small bags or handbags no larger than 35cm x 40cm x 19cm (approx. an A3 piece of paper).

There are no storage facilities for large items within the venue and it will be left to the patron to find a safe temporary facility to hold them. The venue will not be responsible for late admission or non-admission as a result of this policy.

If you are collecting tickets on the day a temporary box office has been set up on the Trinity Way corridor next to the Arena car park entrance. This temporary box office will be open from 4.00pm only on a show day and will close approximately 15 minutes after the main act goes on stage.

Please check Manchester Arena's website (manchester-arena.com) and follow them on social media (@manchesterarena) for specific show information before your visit.


Set to be one of the most highly anticipated tours of 2020, Stormzy has today announced a huge 55-date ?H.I.T.H. World Tour'. With shows spanning across Europe, Asia, Australia, New Zealand, North America, UK & Ireland and Africa, the tour marks Stormzy's biggest live offering to date. Kicking off the tour in Dubai on February 7th and concluding in Africa in October, the tour will also see him make his solo debut at The O2, London for two nights on 3rd & 4th of September, marking his first solo shows in the capital since his 3-day stint at O2 Academy Brixton in May 2017! Subsequent to The O2 shows in London, Stormzy will grace the stages of 11 more arenas throughout the UK and Ireland, concluding at Bournemouth's international Centre on 22nd September. Thereafter he will head to Africa to tour for the first time, notably playing a date in his homeland of Ghana, before ending the world tour with a show in Lagos, Nigeria

Stormzy's forthcoming album, ?Heavy Is The Head' marks a hugely exciting return for the multi award-winning phenomenon and is a record which has been executively produced entirely by the musician himself; showcasing his world class lyricism and musicality alongside many of his celebrated and relatable subject matters. The album also features additional vocals from some of the most exciting musicians of this generation - all of whom have been hand-picked by Stormzy including, (in alphabetical order) Aitch, Burna Boy, Ed Sheeran, Headie One, H.E.R., Tiana Major9 and YEBBA with production from Fred Gibson, Fraser T Smith, T-Minus and others.